Who owns PBS Hawaii?
PBS Hawaii, a Public Broadcasting Service (PBS) member station, is a community supported public television station licensed to the Hawaii Public Television Foundation. A volunteer Board of Directors made up of Hawaii citizens directs the policies carried out by PBS Hawaii’s staff and volunteers.

Where does PBS Hawaii get its operating funds?
PBS Hawaii relies in large part upon contributions from individual viewers and support by local businesses and charitable foundations. We also qualify for grants from the Corporation for Public Broadcasting and receive 1% of proceeds from the cable franchise fee. 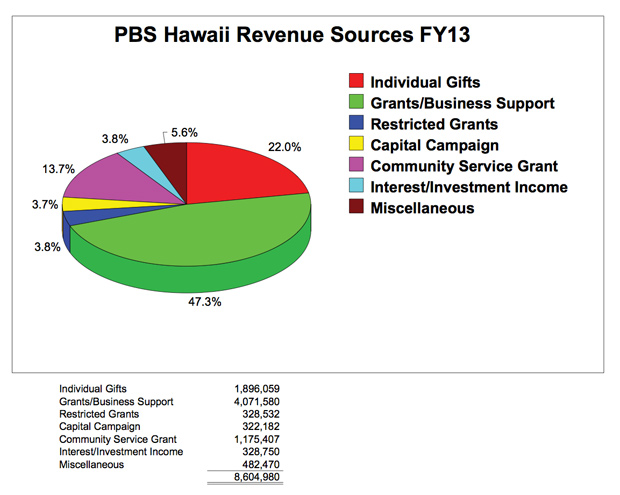 What are the biggest financial challenges facing PBS Hawaii?

PBS Hawaii faces the constant challenge of upgrading aging equipment and facilities. Additionally, costs to acquire and broadcast our quality programming have risen substantially over the past few years. Unlike commercial stations, one of the largest sources of our revenue comes from our individual viewer-members, who help ensure that we can afford the $1.6 million it costs to purchase and air new shows each year.

Why is PBS Hawaii worthy of support?
As a non-profit organization, PBS Hawaii is truly Hawaii’s community station. First, no other station offers you the breadth and depth of programming that we do. Second, no other station offers you the quality of programming that we do. And no other station showcases the arts and talents of all people or highlights the concerns of communities here in Hawaii, across the country, and around the world, as we do. We don’t create programs to make money, we raise money to create meaningful programs for you and all the people of Hawaii. PBS Hawaii is the only locally owned TV broadcaster in the State ofHawaii.

TV FAQs
I was expecting to see a certain program, but another one aired instead. What happened?
We receive our programs from a wide range of sources, including satellite delivery and local production in our own facility. On rare occasions these services may fail to deliver a needed program in time for its broadcast or the program received is not broadcast quality. Consequently, we may need to change our schedule. Whenever possible we do make every effort to alert viewers and inform them if and when the show will be rescheduled through our program guide on our website.

Why am I not receiving a picture from PBS Hawaii?

PBS Hawaii’s transmission network is very complex and often subject to unknown or unforeseeable circumstances that may affect the signal delivered to your home. If you experience a problem receiving any of our programs please call our Troubleshooting Hotline at (808) 973-1175.

To help us assist you, please have the following information available:

If you have cable, you may need to contact your cable provider and/or check the cable connection to your television.

An extra voice is describing everything that happens on the programs. What is it and how do I make it stop?

The voice providing the descriptions of the action on TV programs is called DVS (Descriptive Video Service). This service enables viewers who are visually impaired to enjoy PBS programming and is embedded into many of our children’s and primetime programming.

If you are experiencing this and would like it stopped, you need to go to the Secondary Audio Program or SAP function that is on your television set, VHS and/or DVR. Go to the menu screen of any or all of the above devices and switch the option to Off or Stereo. This feature may also be accessible from the remote control button marked with a musical note, or the word “audio.”

Why is the background music so loud in some of your programs? It's often louder than the actors speaking.

The majority of PBS programs are produced in stereo. When programs that are produced in stereo are put through an audio processor such as those found on most newer television sets and on many home theatre sound systems, the audio may sound hollow or the background music and noise will be louder than the dialog. To correct this problem, go to your television’s audio menu screen and turn off the “surround sound” (sometimes known as “enhanced”) feature. This feature may also be accessible from the remote control button marked with a musical note, or the word “audio.”

What is happening with PBS Hawaii and Digital TV?

Congressional legislation has mandated that all broadcasters transition from traditional analog TV to a new type of broadcasting technology known as Digital Television or DTV.

By February 17, 2009, all broadcast stations were required to convert to digital broadcasting and are no longer allowed to broadcast an analog signal. To take full advantage of this mandated transition, PBS Hawaii replaced analog technology that had been in use for more than half a century with digital technology. Analog broadcasting continued until the end of the transition period on February 19, 2009. PBS Hawaii continued to broadcast both analog and digital signals until then.

As a result of this mandated conversion, all viewers will need to make changes in some or all of the television equipment they currently use to receive TV programming.

In 2005, PBS Hawaii began operating a state-of-the-art, all digital, high definition capable master control system. This conversion to digital allows PBS Hawaii to broadcast free programming streams on not just one, but multiple, channels. Broadcasting multiple channels gives viewers access to our high definition channel and gives PBS Hawaii the ability to broadcast another channel with our popular how-to shows, simultaneously on another channel.

Will I need a new TV?

It depends, but if you own an analog TV and rely on an antenna to receive PBS Hawaii, you will need to either purchase a television with a digital tuner or a converter box to view our station after February 19, 2009. A converter box will receive DTV signals and change them into an analog format that your current analog TV can display. Until then, your current TV will still receive PBS Hawaii’s analog signal.

If you purchased a TV before 1998, it will certainly require the addition of a converter box to receive and display DTV signals. If you need to purchase a television now, it would be wise to invest in a set that can display both analog and digital signals (i.e. the TV contains both an analog tuner and a digital tuner).

I subscribe to cable or satellite. Do I need to be concerned about the transition from analog to digital broadcasts?

You probably will not notice much of a change for those TVs hooked up to your cable or satellite services. We are currently working with Time Warner Oceanic Cable to have all of our digital signals carried by their state-wide system, but if you wish to view programs in high-definition, you will need to purchase a high-definition monitor to hook-up to the component outputs of the cable/satellite box.

Where can I find more information about DTV transition?